So disappointed to see contractors spraying grazon on our road verges and next to drains. It is still raining on and off here too. 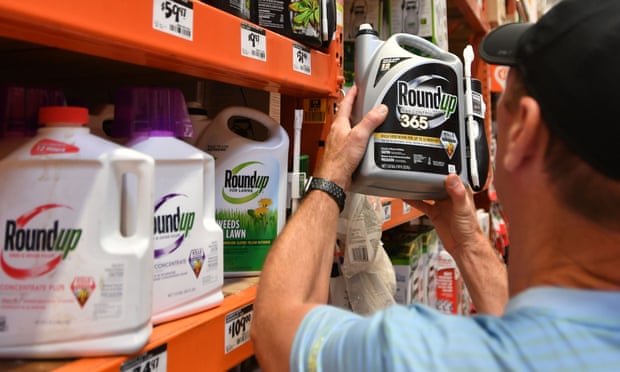 A jury found the weedkiller Roundup had been defectively designed and its makers acted negligently. Photograph: Josh Edelson/AFP/Getty Images
A California jury has ordered Monsanto to pay more than $2bn to a couple that got cancer after using its weedkiller, marking the third and largest verdict against the company over Roundup.
A jury in Oakland ruled Monday that Monsanto, now owned by the German pharmaceutical corporation Bayer, was liable for the non-Hodgkin’s lymphoma (NHL) cancer of Alva and Alberta Pilliod. The jury ordered the company to pay $1bn in damages to each of them, and more than $55m total in compensatory damages.
The victory for the Pilliods follows two consecutive trial wins for families taking on Monsanto over Roundup, the world’s most widely used weedkiller, which research has linked to NHL, a cancer that affects the immune system. Dewayne Johnson, a former school groundskeeper with terminal cancer, won a $289m victory in state court last year, and Edwin Hardeman, who sprayed Roundup on his properties, was awarded $80m in the first federal trial this year.
The latest verdict is the largest by far and will increase pressure on Bayer, which has suffered share price drops in the wake of the verdicts and is now facing similar lawsuits from thousands of cancer patients, survivors and families who lost loved ones to NHL.
The juries have repeatedly ruled that Roundup was defectively designed, that the company failed to warn consumers about the cancer risks, and that Monsanto has acted negligently. The cases have uncovered internal Monsanto documents that plaintiffs’ lawyers say reveal the ways in which the company has “bullied” scientists over the years and helped “ghostwrite” research defending the safety of glyphosate, the main ingredient in Roundup.

Bayer and Monsanto have continued to argue that Roundup is safe to use and does not cause cancer. They are appealing the verdicts.
“Monsanto has never had any interest in finding out whether Roundup is safe,” R Brent Wisner, one of the Pilliods’ attorneys, said in a statement after the verdict. “Instead of investing in sound science, they invested millions in attacking science that threatened their business agenda.”
The Pilliods, who are in their 70s and live in Livermore, 40 miles east of San Francisco, used Roundup for more than 30 years to landscape their home and other properties. In 2011, Alva was diagnosed with systemic NHL in his bones, which spread to his pelvis and spine, and Alberta was diagnosed with NHL brain cancer in 2015. Both are in remission but testified about lasting damage from the cancer.
Michael Miller, another attorney for the couple, noted that the judge in this case permitted the legal team to present significant evidence about Monsanto’s conduct, in contrast to previous trials, where evidence was severely limited.
“We were finally allowed to show a jury the mountain of evidence showing Monsanto’s manipulation of science, the media and regulatory agencies to forward their own agenda despite Roundup’s severe harm to the animal kingdom and humankind,” he said in a statement.
Bayer said it was “disappointed” in the decision and would appeal. The company cited the continuing approval of glyphosate by the US Environmental Protection Agency (EPA) and “the consensus among leading health regulators worldwide that glyphosate-based products can be used safely and that glyphosate is not carcinogenic, and the 40 years of extensive scientific research on which their favorable conclusions are based”.
Internal documents uncovered in the trials have repeatedly shone a harsh light on Monsanto’s close relationship with US regulators. The lawsuits began piling up after a key 2015 ruling by the World Health Organization’s International Agency for Research on Cancer, which said glyphosate was “probably carcinogenic to humans”.
The plaintiffs’ attorneys estimate that there are now 13,400 similar Roundup cancer cases pending in state and federal courts in the US.